Hydrogels undergo volume changes when immersed in water, the degree of which is determined by the network chemical composition and crosslinking. When a hydrogel is attached to a rigid substrate, it swells preferentially perpendicular to the substrate, even though the initial gel was crosslinked homogeneously.  This effect arises because the top layer has more freedom to expand. When the osmotic pressure is large enough, the outer surface buckles, resulting in the formation of a surface topography patterns.   However, the nonlinear nature of the gel swelling and lack of the control on osmotic pressure make it challenging to control the long-range order and morphology of the final patterns.  By introducing crosslinking gradient along the film thickness in poly(2-hydroxylethyl methacrylate) (PHEMA) gels, we are able to fine-tune the network modulus profile, leading to better control of the spontaneous formation of a wide range of surface patterns. Patterns range from highly ordered hexagonal structures to peanut shapes to lamellar and random worm-like structures.  We have applied this patterning scheme to create a diverse range of hydrogels for exploration of ideal morphologies for tissue engineering scaffolds. Specifically, it allows us to look at living networks, such as cells, and identify the molecular mechanisms that cells use for mechanosensing. 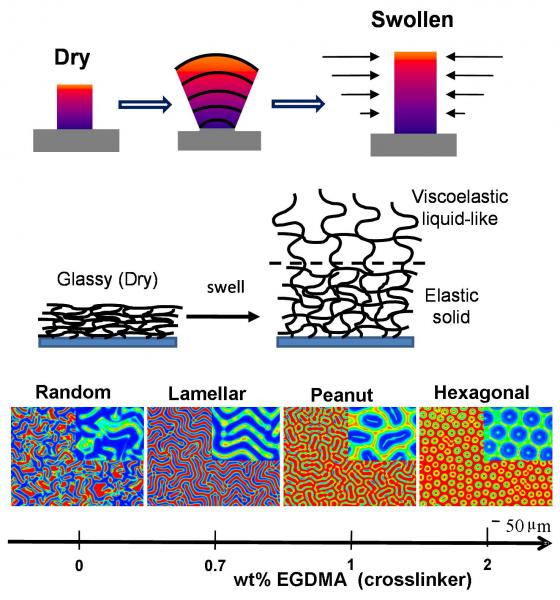 In order to develop an in-depth understanding of the mechanism of surface pattern formation in linear hydrogels and later for manipulation of their responsiveness to environmental changes, Yang and Burdick investigated the dynamic evolution of surface patterns in photocured hydrogel films from poly(2-hydroxyethyl methacrylate) (PHEMA) crosslinked with different concentrations of ethylene glycol dimethacrylate (EGDMA, 0- 3 wt%). During curing in the presence of oxygen, a modulus gradient along the film depth was generated due to oxygen inhibition of the radical polymerization near the film surface. The swelling-induced wrinkling pattern formation followed Fickian-type kinetics (l~t1/2) at early stages, which was independent of the final pattern morphology. The onset of wrinkling was found at a linear expansion of ~ 1.12, which remained constant with increasing EGDMA concentration but decreased with increasing film thickness, indicating an increase in critical stress with crosslinker concentration. In contrast, the equilibrium linear expansion value decreased significantly (from 2.55 to 1.20) with increasing crosslinker concentration (from 0 to 3 wt%), resulting in transition of surface patterns from highly ordered hexagonal pattern in transit to peanut shape, lamellar and random worm-like structures. We believe that the presented study of swelling kinetics of the PHEMA gels with gradient crosslinking density will shed light on how to control long-range ordering in swelling-induced pattern formation, for example, using non-homogeneous gels.
Burdick then replicated the above PHEMA gels with lamellar or hexagonal surface wrinkles into homogeneous hydrogels to investigate the effect of surface morphology to stem cell differentiation. When seeded with human mesenchymal stem cells (hMSCs), cells attached to lamellar wrinkles spread by taking the shape of the pattern, exhibited high aspect ratios, and differentiated into an osteogenic lineage. In contrast, cells that attached inside the hexagonal patterns remained rounded with low spreading and differentiated into an adipogenic lineage.  These findings will offer new insights about the ideal surface morphology for tissue engineering scaffolds.