Like
liquids, solids can flow under applied shear stresses.  In crystalline solids, figuring out vulnerable regions where the material will break under stress is
well-established—they are typically controlled by a population of defects in
the crystal structure known as dislocations.
In disordered solids, however, defects are everywhere, making the task
of identifying such vulnerable spots
much more daunting.

When
a disordered solid is placed under mechanical load, it can fail via localized
rearrangements of particles.  These
rearrangements are what allow the solid to flow.  We showed that there is a link between the
nature of vibrations in disordered packings and mechanical failure.  We studied the vibrations of thermosensitive colloidal particles in a dense packing
before it was placed under compression, identifying a population of soft spots.
We then showed that these localized regions are indeed vulnerable to
rearrangement.  Thus, we are now able to
identify the vulnerable regions in a dense, disordered packing before it fails under a load. We are now examining the ways in which these results apply to disordered atomic packings. 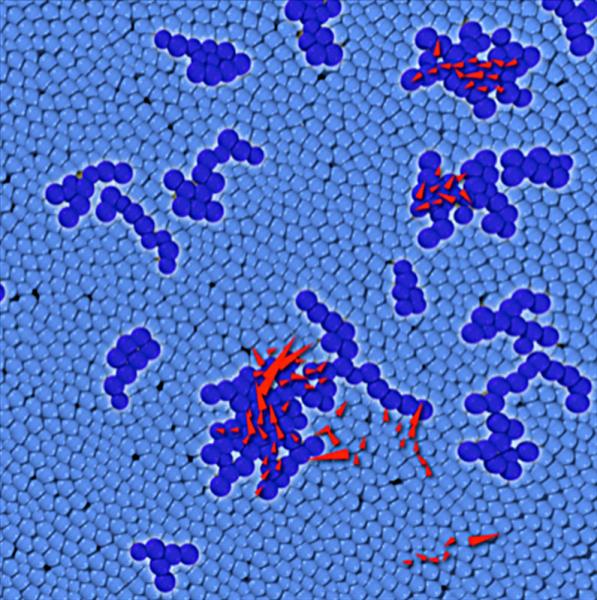 In a
dense disordered packing, the particles labeled in dark blue belong to soft
spots that have a propensity to fail via particle rearrangements.  The red arrows mark particles that actually
rearrange when the system is placed under a mechanical load.  This image shows that rearrangements tend to
occur at soft spots.