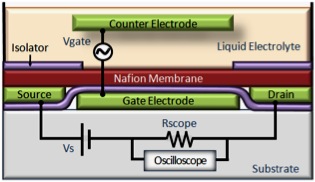 The devices in computers that are used to switch electrical current on and off are field effect transistors.  In these devices electric fields are used to switch the current.  Researchers in the Renewable Energy MRSEC at the Colorado School of Mines have made the first “field effect transistor” that switches currents of charged atoms, called ionic currents.  In this prototype device the atoms are positively charged hydrogen (protons) and the transport medium is a material called Nafion. Potential applications of this novel device include electrochemical switches and ionic logic components.  Instead of nano-electronics one can now think about “nano-ionics”.