Protein 'Passport' That Help Nanoparticles Get Past Immune System

What’s the Problem?   Macrophages are part of the
innate immune system and will try to eat anything they don’t recognize
as being part of the body — they’re like border patrol guards, checking
everybody’s passports. If you’re a red blood cell, you have the right
passport and get waved on. But if you’re a piece of dirt or a
bacterium, you don’t have the right passport, and Macrophages get you.
The problem is that there are some things we actually want to be in
body, like drug-delivery particles, that get eaten by these
macrophages, too. 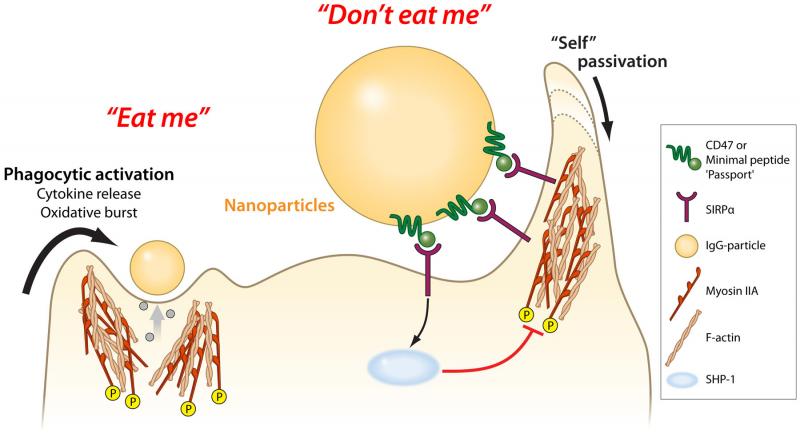 What’s the Solution?  Other approaches involve
trying to physically block macrophages from checking the nanoparticle’s
passport — trying to sneak past the guards with 'polymer brushes'.
What we’re doing is different — we’re forging passports. We took a
human protein that’s on the exterior of all human cells that tells
macrophages ‘don’t eat me’, and we simulated and synthesized the
simplest functional version of it.
We stuck this “minimal peptide” on the exterior of some plastic
nanoparticles and then tested whether they would fool the immune system
into thinking they were part of the body.