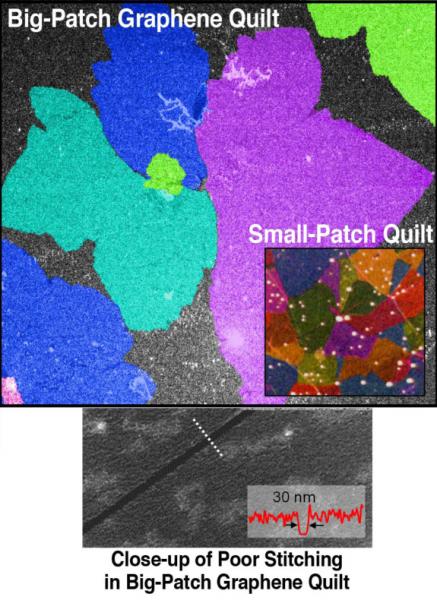 The outstanding electronic and mechanical properties of
single-atom-thick layers of carbon, so-called “graphene” films, make
them ideal for next-generation solar cells and transistors. However,
attempts to grow these films over large areas invariably lead to
quilt-like structures of interconnected atomically-perfect patches
(crystals), which are shown in different colors in the electron
micrographs at right. Scientists have been working to grow films with larger perfect patches, anticipating that this would lead to better performance.

Researchers at Cornell have shown that the size of the patches is less important than the quality of the “stitching” that holds them together. When graphene is grown quickly, the film consists of many small patches that are tightly stitched together. Slow growth leads to much larger patches that are poorly stitched together. Measurements of the electrical conductivity between adjacent patches show that tightly-stitched patches have almost the same performance as atomically-perfect films. In contrast, poor stitching leads to compromised electrical performance. This result is an important step towards the integration of graphene into next-generation electronic devices.