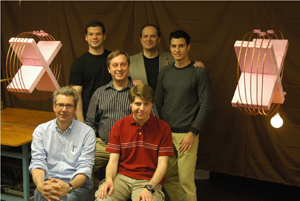 Members of IRG-I of the MIT MRSEC have recently demonstrated wireless transfers of power on the order of 60W over distances greater than 7 feet, with efficiency of roughly 50%, confirming the predictions of an earlier theoretical paper. The power transfer scheme proposed, dubbed "WiTricity," could be used for wireless charging of autonomous electronic devices (e.g. laptops, cell-phones, iPods).

WiTricity is omni-directional (it works irrespective of the relative position of the energy source and the device being powered) and does not require direct line of sight between source and device. The power transfer worked well even when the space between the two objects was completely obstructed. WiTricity is based on coupled resonant objects operating in a so-called "strong coupling regime,"which is key for efficient transfer of power. At current power levels, the apparatus could power two or three laptop computers or a few dozen cell phones inside a room simultaneously. The researchers' calculations suggest that their system could be designed to operate within general safety standards for general population exposure. The MIT team is currently pursuing several ideas to improve the performance of the system. They would like to increase the distance of the power transfer (up to a few yards), improve the efficiency,and miniaturize the "receiver" so that it can fit inside portable electronic devices.

* supported by the MIT MRSEC

Photo: Members of the team that performed the experiment demonstrate wireless power transfer over 2m distance, from the coil on the left to the coil on the right, where it powers a 60W light-bulb. They are obstructing the direct line of sight between the coils.