A new way to keep bacteria at bay

Penicillin, long used in medications, is now being studied as a coating, a novel weapon against bacteria that could protect medical implants and the surgical tools used to insert them. The development could potentially save thousands of lives, as many patients contract infections following surgery. The innovation was developed by researchers at the University of Southern Mississippi through the work of polymer science professor Marek Urban and his team of researchers in the School of Polymers and High Performance Materials. To shed light on the possibilities for the new technology, Urban recently discussed the discovery with Behind the Scenes. 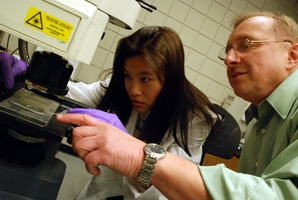 How would you describe this new development?

This is the first study to show that antibiotics can be attached to a surface. We have developed a way to modify a surface to allow penicillin to be attached to varying lengths of "spacer molecules"  - this results in a spongy surface that mimics Mother Nature. When a bacteria lands and attempts to form a deadly microbial film, the penicillin molecules surround the bacteria and disrupt this process. This is a unique approach that hasn't been explored before and involves both chemistry and shape. The chemistry part allows the drug to be attached, while the control over shape allows for surface modifications, depending on the application.

What does it mean for the general public?

Through laboratory experiments, we demonstrated that the penicillin-coated surfaces were highly effective against staphylococcus aureus, one of the most deadly and pervasive causes of staph infections. The process of sterilization of surgical instruments isn't 100 percent effective. Bacteria get resistant to this type of environment, so the problem becomes more pronounced. If sterilization were completely effective, there wouldn't be thousands of people who die each year from infections caught in the hospital.

The potential impact of this breakthrough is huge for anyone who has any kind of surgical procedure performed in the hospital. Nearly 2 million people in the United States get an infection while in the hospital. Of those, more than 90,000 die each year from infections not related to their medical condition, according to the CDC (U.S. Centers for Disease Control and Prevention). Worldwide, that number is exponentially larger.

Beyond fighting infections, are there other applications for this discovery?

While our team's laboratory experiments were conducted using penicillin, the process could be expanded to different antibiotics, which is critical since so many people are allergic to penicillin. Another reason for extending the process to other antibiotics: an estimated 70 percent of the bacteria that cause hospital-acquired infections are resistant to some of the antibiotics most commonly used to treat them. The development also can be used to develop anti-clotting surfaces, preventing blood clotting on implants.

How long has your team been working on this project?

Our research team has significant experience in modifying polymer surfaces, but developed this particular technique only within the past year. Other members of the team are Nattharika Aumsuwan from the School of Polymers and High Performance Materials and Sabine Heinhorst from the Department of Chemistry and Biochemistry. {The research was originally reported in the Feb. 12, 2007, issue of Biomacromolecules, a monthly journal published by the American Chemical Society.}

What's the next step in bringing this technology into the marketplace?

While the development is promising, clinical studies and tests are still necessary before the application becomes a reality. A patent is pending on the discovery while the university is exploring avenues to take the technology to the marketplace. The university is looking for commercial partners who can take it to the next level. Our researchers make the discovery and a university company looks for partners who can help turn it into products. This project is a perfect example of how this partnership between science and business commercialization works at Southern Miss. In the end, what we're doing here is not only contributing to the betterment of society, but also making an economic development impact on behalf of our university.

About The University of Southern Mississippi

The University of Southern Mississippi, founded in 1910, is a comprehensive doctoral and research-extensive university fulfilling its mission of being a leading university in engaging and empowering individuals to transform lives and communities. In a tradition of leadership for student development, Southern Miss is educating a 21st century work force providing intellectual capital, cultural enrichment and innovation to Mississippi and the world. Southern Miss is located in Hattiesburg, Miss., with an additional campus and teaching and research sites on the Mississippi Gulf Coast; further information is found at www.usm.edu. Download slide .pdf Download press release Links in other publications: Forbes.com Livescience.com