The lack
of fundamental understanding of the role of oxygen in non-water based electrolytes
significantly hinders the development of rechargeable lithium-air batteries.  This IRG has developed a new X-ray
photoelectron spectroscopy (XPS) technique that makes it possible to
study the lithium/oxygen chemistry occurring during battery operation as a
function of applied voltage and controlled oxygen pressure.

This study provides
the first evidence of reversible lithium peroxide formation and decomposition
in situ on an oxide surface of a solid-state
cell and connects the electrical potential of the battery to oxygen
redox chemistry in the presence of
lithium ions at room temperature. 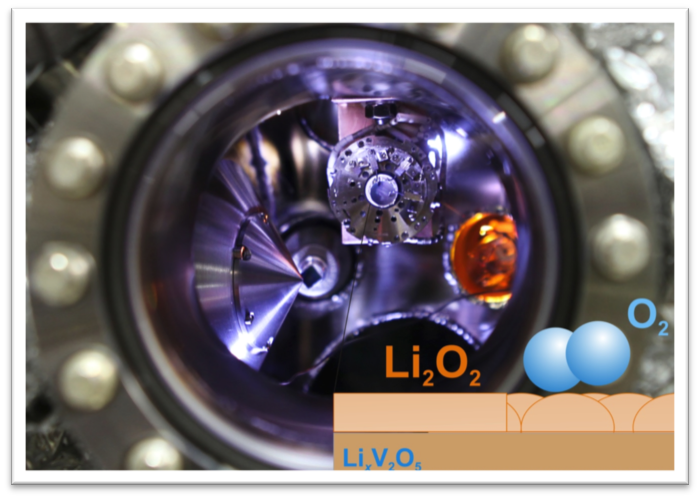 Image depicting a solid-state lithium-air
battery inside the in situ ambient pressure X-ray photoelectron spectroscopy
chamber filled with oxygen for investigation of lithium-oxygen redox reactions.
(Right bottom: a schematic illustrating the formation of lithium peroxide on
the surface of a lithium vanadium
oxide electrode)
Author(s) with affiliations: