Anisotropic magnetoresistance (AMR), i.e. the change in the electrical resistance of ferromagnetic metals with magnetization direction, has been known since the middle of 19th century. This phenomenon originates from the anisotropy of electron scattering produced by spin-orbit coupling in bulk ferromagnets. Researchers at the University of Nebraska MRSEC [Sokolov et al., Nature Nanotechnology 2, 171 (2007)] in collaboration with their colleague from Strasbourg, France have demonstrated experimentally that the nature of AMR in nanoscale conductors is profoundly different due to ballistic mechanism of electron transport occurring in the absence of scattering. By measuring in-situ the ballistic conductance of Co electrodeposited nanocontacts at room temperature the researchers found that the conductance changes in a quantized fashion when the saturation magnetic field changes its direction as shown below. This behavior is the signature of Ballistic Anisotropic Magnetoresistance (BAMR) effect predicted earlier by the Nebraska MRSEC theorists [Velev et al, Phys. Rev. Lett. 94, 127203 (2005)]. BAMR may be appealing for the future generation of ultra-small electronic devices, such as ultra small magnetic read heads, quantum switches and logic circuits, due to the possibility to control the quantized conductance by applied magnetic fields. 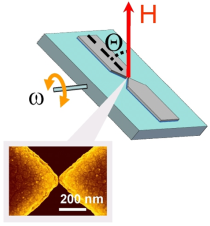