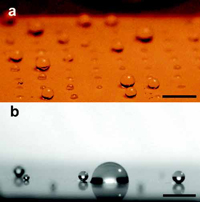 In the Namib Desert in Namibia, Africa, a tiny beetle is able to convert
microscopic droplets of water present in a morning fog into larger
sized droplets that are directed into the beetle's mouth to quench a
desert thirst. Inspired by the remarkable accomplishment of the tiny Stenocara beetle, R. Cohen and M. Rubner of IRG-II of the MIT MRSEC have created a synthetic mimic of the beetle's unique surface pattern of water-attracting (hydrophilic) and super water-repelling (superhydrophobic) regions (Zhai et al. Nano Letters 6(6), 1213-1217, 2006). Using a simple patterning scheme, they were able to create a superhydrophobic surface patterned with super water-attracting (superhydrophilic) regions, thus going beyond the beetle's unique surface architecture. Such patterns of extreme wetting behavior can be used to manipulate the flow of water on surfaces. Potential applications include fog- and dew-harvesting materials for arid climates, open channel microfluidic devices and microarrays for diagnostic testing. In this coming year, local TV stations all over the U.S. will air a DBIS science news video spot focusing on this research. Discoveries and Breakthroughs Inside Science (DBIS) is a syndicated television science news segment produced by The American Institute of Physics with support from the National Science Foundation.

Figure: Photographs showing (a) small droplets of water collected on hydrophilic regions of a patterned superhydrophobic surface after spraying with a fine water mist, and (b) sideview photograph of a section of the same patterned film illustrating the coexistence of superhydrophobic regions (water remains as essentially spherical droplets that roll on the surface) and water collecting hydrophilic regions (water is pinned at these sites). Scale bar in bottom photo equals 750 microns.