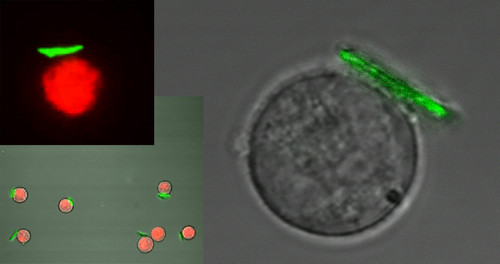 Professors Cohen, Irvine and Rubner of the MIT MRSEC have developed a new process for attaching nanoscale thickness polymer backpacks onto living immune system cells. Prior to attachment, the polymer backpacks can be loaded with a wide range of functional materials including cancer drugs, imaging molecules and magnetic nanoparticles. After attachment, B-cells and T-cells remain viable and, since only a portion of their cell surface has been occluded by the backpack, are able to carry out their normal functions such as cell migration. Although still in the early stages of development, this work opens up the exciting possibility of having immune system cells selectively target, carry and deliver therapeutic drugs to disease sites.

Image: Fluorescence microscopy images of living B-cells (orange fluorescence) with functional nanoscale backpacks attached (green fluorescence). Cells are about 15 microns in diameter. The backpacks in this case contain magnetic nanoparticles that provide both imaging capability and the ability to move the cells in magnetic fields.

The research was primarily funded by the NSF MRSEC Program (award DMR-08-19762).