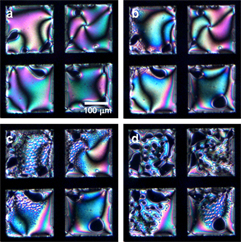 Liquid crystals that realign in response to DNA can reveal subtle sequence alterations, even a single base mutation. Center investigator Dan Schwartz.and doctoral student Andrew Price showed that nematic liquid crystals, which naturally align themselves perpendicular to the surface of a surfactant-coated glass slide, tilt slightly following the addition of short lengths of single stranded DNA. The addition of complementary strands of DNA - with a base sequence that would bind to the strands on the slide - triggers the tilted crystals to return to their perpendicular alignment. However, adding a non-complementary DNA strand - with a sequence that differs by just one base - causes no such response. These differing responses of the liquid crystals are easily observed in polarized light. The finding could lead to cheap, portable alternatives to current lab-based analytical detectors. The Figure shows the texture of a liquid crystal film to which single-stranded DNA has been added (a) changes progressively with the addition of complementary single-stranded DNA (b-d).