Electronic phase transition in graphene in a magnetic field

Graphene is comprised of a single layer of C atoms in a hexagonal lattice array.  The electronic state of graphene is of great interest because the electron energy increases linearly with momentum, just like for photons and neutrinos.  This is called a massless, Dirac dispersion.  The nature of the electronic state at zero energy (the “Dirac point”) in a strong magnetic field H is currently the subject of theoretical debate. The figure shows the resistance R0 at the Dirac point increasing abruptly by over 3 decades from 10 kΩ to 40.  Two competing theories describing the high-field insulating state are shown in the insets.   In the charge-density-wave (CDW) model (top inset), electrons preferentially occupy every other site (red circles).  In the “Kekule” model (lower inset), the bonds linking adjacent C atoms (blue ovals) shorten slightly in an alternating pattern reminiscent of benzene.  Which of these models (or future ones) is correct is being actively researched. 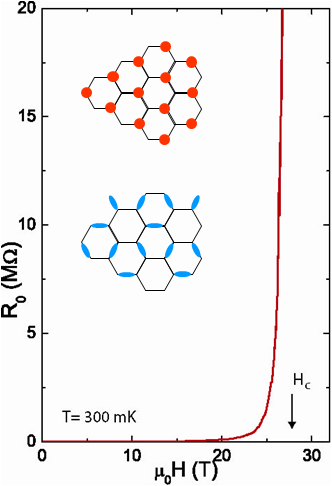 Figure 1 Plot of the resistance R0 at the Dirac point (red curve) vs. applied magnetic field H at temperature 0.3 K. The steep increase to 40 MΩ signals a phase transition to an insulating state at the critical field Hc. The sketches show the CDW (upper inset) and Kekule models (lower).