Electronic transport through a junction formed between silicon (Si), a monolayer of alkyl chains (C14H29) self-assembled on Si, and a metal (M) is dominated by thermionic emission above the semiconductor barrier and tunneling through the insulating molecular layer [1]. This team of PCCM and Weizmann investigators recently showed [2] that exposing the alkyl monolayers to electron irradiation induces new states between the occupied and unoccupied states of the pristine alkyl chain, evidently through the creation of C=C double bonds and C-C crosslinks since the overall layer density is unaffected. These states strongly affect electronic transport through the monolayer, suggesting a way to significantly extend the use of monolayers in molecular electronics. 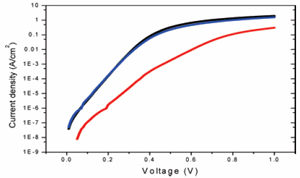