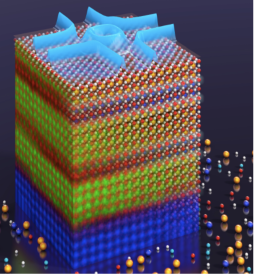 Modern
electronics relies critically on the ability to control electrons near the
interfaces between materials such as silicon. By creating interfaces between
more complex materials, it may become possible to realize more exotic magnetic
and electronic properties which could lead to future-generation devices and
electronics.

A
team of researchers at Cornell University have developed a new experimental
tool which can not only create atomically abrupt interfaces between different
complex materials, but also simultaneously measure the motion of electrons
trapped at these interfaces. This ability is key because the motion and
interaction of the electrons at these complex interfaces cannot easily be
predicted using theoretical tools. In particular, they have discovered that as
the "slices"
in these "atomic
sandwiches"
get thicker and thicker, the effects of interactions between electrons becomes
magnified, ultimately resulting in an insulating state.

The
development of this new tool and technique will be an important step towards
the rational design of new "atomic
sandwiches"
with tailored electronic and magnetic properties for future applications.