PCCM researchers have discovered a new method for making gratings: by prying apart two rigid plates that sandwich a thin, glassy polymeric film. The process fractures the film into complementary sets of ridges on each plate, with the ridges on one corresponding to the valleys on the other. The technique produces patterns with periodic spacing from 120 nm to 200 Â’µm, and the period simply scales as four times the film thickness, regardless of the molecular weight or chemical composition of the glassy polymer. Gratings with areas as large as two square centimeters have been obtained, suggesting the possibility of an easy, rapid, and inexpensive means to manufacture optical gratings whose pitch can be simply and precisely controlled. 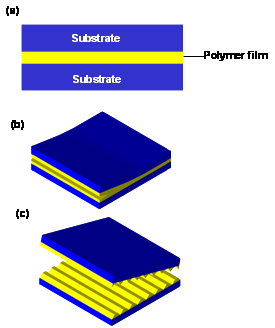 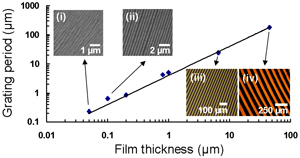