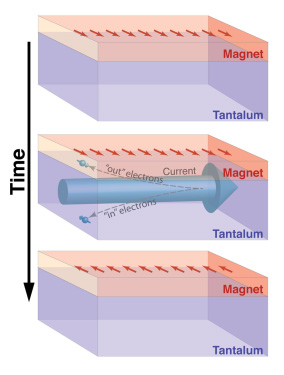 Most computer memory (so-called random-access memory or RAM) is volatile — the computer “forgets” the information when power is removed. The technology for making non-volatile magnetic memory is undergoing rapid progress, because techniques have recently been developed to change the orientation of small magnets without magnetic fields. This allows for denser, more efficient, and less expensive memory.
Cornell researchers have demonstrated a “giant” spin Hall effect that allows electrical currents to “write” information (flip the direction) of tiny room-temperature magnets, as sketched at right. Current flowing through a thin tantalum layer leads to a deflection of electron spins that is large enough to flip the magnetization of a neighboring magnet. When no current flows, the magnet stays in place even if the device is powered off — the memory is non-volatile. To flip the spin back, the researchers simply reverse the current.
This simple, reliable, and efficient design may eliminate the main obstacles to the development of magnetic memory and non-volatile spin logic technologies.